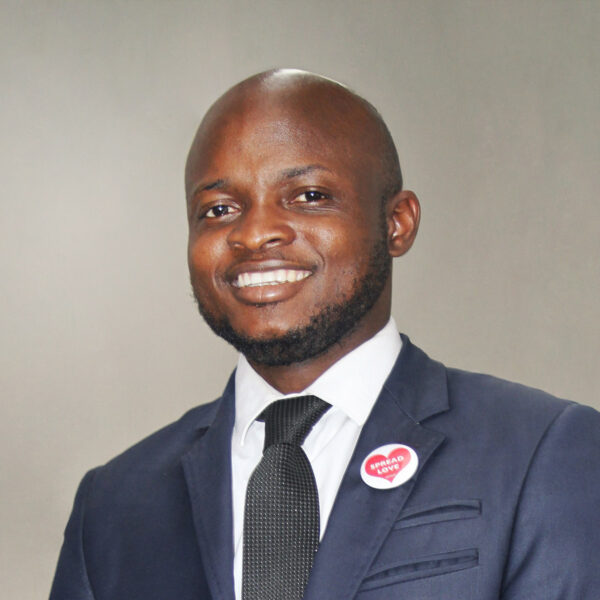 Achaleke Christian Leke is an international development, peacebuilding and violent extremism expert with 15 years of experience working as a practitioner, researcher and academic, born and raised in Cameroon. He holds an MSc in Conflict Security and Development from the University of Birmingham.

Building on his childhood experiences, Christian has developed into a fine asset in International relations and development, humanitarian, peacebuilding, conflict prevention and counter violent extremism responses.

Christian joined LOYOC as a volunteer in 2007 and he grew from a volunteer into other roles within the organization and was appointed the Executive Director in 2020. Through this organization, Christian has led over 600 community development projects across Cameroon with a wide experience in partnership and resource mobilization, project designing, monitoring and evaluation . Watch Christian’s interview on BBC Focus on Africa. Under the leadership of Achaleke, the local organization grew into a nationwide organization with field offices covering the 10 regions of the country. The organization grew from 1 staff to 25 paid staff and is providing career opportunities to over 100 young people and experts every year.

As part of his peacebuilding strive, he has successfully incorporated community approaches, personal experience and research into his work. Mounting powerful advocacy at the international, national and community level for more youth safe and secured spaces for young people in development and peace building is one of his successful strategies. His belief in an interdisciplinary approach in peacebuilding while focusing on providing solutions to drivers and causes of violence and violent extremism is the key to his great impact. Using capacity building models, face to face/mass/ social media sensitisation, entrepreneurship development, advocacy, civic education, leadership and vocational skills, He has been able to empower over 3 million young people in Cameroon and across the world. He remains passionate and inspired in working with youth violent offenders and those vulnerable to radicalization and violence in building a powerful mass of peace ambassadors in Cameroon and the world at large.

Achaleke has acquired wide experience of working with and for several national and international organizations as a consultant and expert in the domain of project design, resource mobilization, research, policy analyst, training, monitoring, evaluation and learning just to name a few. Some of these institutions include; the Commonwealth Secretariat, the African Union, United Nations Development Program, Institute of Security Studies, UNESCO, the World Bank just to name a few. His work has given him the opportunity to travel widely across the world to over 40 countries, meeting and working with young people and development stakeholders. During this his journey, he has spoken in and served as expert in over 200 national and international conference across the word

Achaleke has a successful track record of designing and implementing transformative initiatives towards community development, building peace, conflict prevention and countering violent extremism. With over 600 projects designed and implemented under his leadership, some of them include; the Salaam Initiative which is providing free residential education for children affected by Boko Haram; the Creative Skills for Peace Project which is supporting over 5000 inmates with effective rehabilitation and reintegration; Youth Say no to Hate Speech; the STAR project which is Strengthening Trust and Relationships between Community, Security, and Justice Sector Actors for Improved Security in Far North Cameroon; the ENERGY-Project which seeks build a collaborative space between and among young people from different walks of life to better engage them to work with their communities and with other stakeholders in the North West and South West Regions of Cameroon in building peace; the Operation one Person One Hand Sanitizer-Project which responded to COVID19 by local produce and donate 100000 COVID19 PPEs to vulnerable communities. Just to name a few

Achaleke has developed into a remarkable leader who is serving communities, nations and the world in several leadership roles. Most recently, He was appointed by the African Union to serve the African Union Peace and Security Program as African Union Youth Ambassador for the Central Africa sub-region. In 2019, he joined the Youth Advisory Committee for  Dallaire Institute’s Knowledge for Prevention Programme at the Dallaire Institute for Children, Peace and Security Dalhousie University, Canada. He was appointed in 2018 to serve as a Member of the Advisory Board and joined the roster of experts at the International Institute of Justice and Rule of Law, University of Malta-Valletta. From 2016 to 2020 he served as Pan-Commonwealth (Global) Coordinator of the Commonwealth Peace Ambassadors Network(the largest youth peace-building network with over 500 organizations from across the Commonwealth). In 2014 he was appointed by the Ministry of External Relations and the Ministry of Youth Affairs and Civic Education to serve his nation as Cameroon Youth Ambassador to the Commonwealth with the mandate of representing young Cameroonians across the Commonwealth Nations. He is a Member of the UNOY Global Youth Advocacy Team on Youth Peace and Security. He is also a Member of the UN-Interagency working group on Youth and Peace Building.  Just to name a few

Achaleke for the past years has engaged in academic space with great strives in research and tutoring. In 2018 he joined the University of Buea as a part-time Lecturer for the MA program in Peace and Security Studies. Christian has also lectured, served as a course instructor and expert for several Universities, Research and Academic as well as Higher institutes in the domain of peace and conflict studies. An example is the Swisspeace Course on Communication in conflict. Achaleke has also published, lead research and contributed in several publications which have contributed in shaping youth development, peace and security acros the world. His 2016 OpeD publication on TheHill News I-Know-Why-the-War-on-Terror-isnt-Working was read widely across the world. His authoritative article which highlighted the role of youth to respond to the youth to respond to the Anglophone Crisis is inspiring youth-led and stakeholders efforts across the country.  He has also edited and published several policy documents including; Youths and Peace Processes in Cameroon Opportunities and Challenges.

Achaleke’s work has been marked by several distinctions and recognitions nationally and internationally. In 2020 2020 he was recognized as UNESCO RealLife Hero. His contribution towards responding to COVID-19 was named Best Youth-led COVID19 Response in Cameroon. He was also recognized among Cameroon Achievers Under 40. He has been featured in 2021, 2020, 2017 & 2016 Africa’s list of 100 Most Influential Young Africans.

Achaleke was awarded the 2020 Premio Mundo Negro a la Fratenidad in Spain. He has been nominated twice for the Nelson Mandela Memorial Award. In 2019 Christian was recognized by the Foreign and Commonwealth Office among 35 Best Chevening Changemakers in the World. Christian received recognition as Luxembourg Peace Prize Outstanding Young Peace Maker in 2018. In 2017 Christian received accolades from the Ministry of Youth Affairs and Civic Education as Cameroon Youth Champion.

Achaleke’s team spirit, commitment and approach to identifying and networking with other local organizations across Cameroon and the world has been of great help in shaping youth development and peacebuilding initiatives in Cameroon. His story and achievements as a trainer, project coordinator, mentor, coach, policy drafter and innovator in the domain of youth development, peacebuilding, conflict prevention and security are great inspirations and surely steps on the way to a long journey to inspire young people across the world.