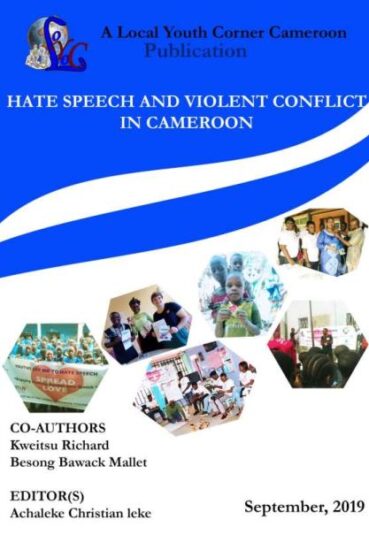 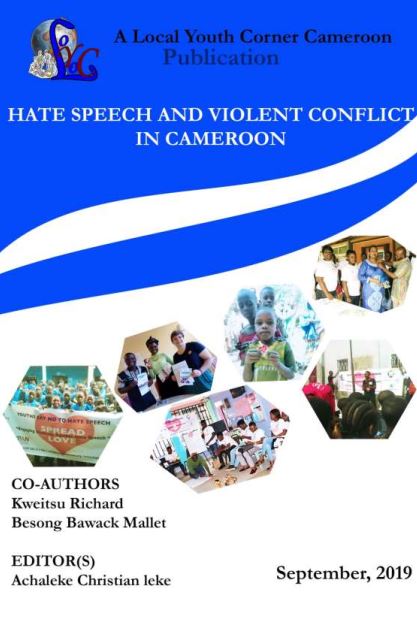 The increase in violent conflict in Cameroon has been captured by available literature as an outcome of poor governance, poverty, discrimination, marginalisation and the list continues. Nevertheless, the role of hate speech,
which seemingly has become a community to national problems, has not been satisfactorily examined as a major driver of violent conflict in Cameroon. This phenomenon grew from the days of colonialism, to independence and to the birth of democracy and now today. This paper (research work) examines the nexus between hate speech and violent conflict in Cameroon. The secondary data used for this publication was supplemented with offline and online interviews and surveys, as well as focused group discussions with young people, traditional and religious authorities, social media influencers, civil society actors and government officials identified from five regions in the four geo-political regions of Cameroon; South West, Far North, Littoral, Centre and North West regions; and diaspora communities.

This work argues that hate speech, which appears in the forms of propaganda, fake news, and disinformation is destroying social cohesion in Cameroon and it is becoming very prevalent among politicians
during elections as well as civilians against government or citizens that are fanning violent conflict in Cameroon. This publication presents the contradiction between hate speech and freedom of speech. It further demonstrates the process involved in hate speech leading to violence as well as presents examples of commonly used hate terms and the main authors of hate speech in the country. This work also emphasizes the prevailing influence of hate speech in fuelling the current crisis in the Far North, Northwest and the Southwest Regions of Cameroon. The work highlights eight positive practices undertaken by young people in Cameroon toward solving hate speech. This work suggests among many recommended solutions that public condemnations of hate speech by government and citizens are not enough. It strongly calls for legislation to curtail and penalise users of hate speech.